Quick - think of two words that strike immediate fear in people’s hearts (and minds). No money? Forever alone? “I’m leaving”? How about this one: Public Speaking.

When I’m not hard at work as AKÏN’s resident copywriter, I occasionally take to the stage as an event emcee. Over the past 12 years I’ve been honing my hosting skills, I get asked questions about handling the fear of public speaking. “I could never do what you do,” some would say; “I don’t know how you can put yourself out there in front of so many people!” said others.

Since there’s a certain vulnerability that comes with public speaking, it’s no surprise that this is a social fear experienced by many, to the point that it even comes up tops over arachnophobia (fear of spiders) and thanatophobia (fear of death). However, public speaking is inevitable, considering how giving presentations is such a big part of corporate life! Being effective in public speaking can also be linked to benefits such as building confidence and self-esteem, and improving critical thinking and communication skills – all of which are important in the workplace.

It may seem daunting to present your work or idea before a room full of people staring back at you, but it doesn’t have to be a dreaded task. Here are some tips that I’ve picked up over my time as an emcee that can be used both on the stage, and even in the boardroom.

As the presenter, the assumption is that you’d probably know much more than your audience – why else would you be presenting otherwise? It’s therefore important to have a good grasp of what you’re presenting.

The adage ‘If you fail to plan, you plan to fail’ may seem like a naggy one, but I can certainly attest to how important preparation is prior to any kind of presentations! I would usually spend about 1-2 evenings prior to the event that I’m hosting to either read up more about it, or to prepare the pointers/script for it.

‘Winging’ it (being spontaneous and impromptu) may work for those naturally inclined to public speaking, but it’s much more reliable to have a prompt or guide to take you through the sequence of the presentation. This prompt can be in the form of cue cards – but even those require some preparation!

When preparing your cues, here’s two things to note:

- Try not to write out your script in full sentences. Having this on hand might make some people feel better, but this could also work against you. While this ensures that you’ll have everything down word for word, there’ll be a tendency for you to keep looking down at your script to catch everything!

- Avoid writing notes on sheets of paper. It can be rather distracting to watch someone waving big white sheets around as they speak.

As such, small note cards with brief pointers will more than suffice. If you’ve practiced your presentation multiple times (which... you should have!), then you’d be familiar with the kind of prompts written on your cue cards and know exactly what needs to be said. 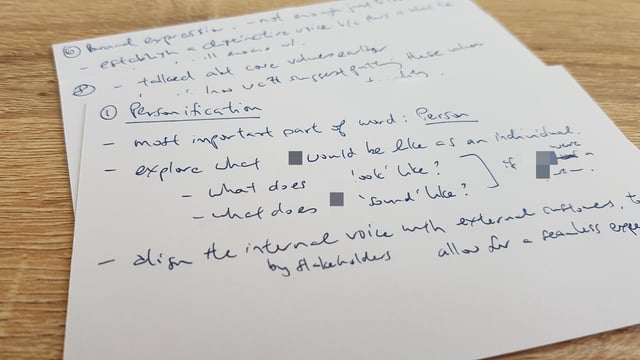 A real example of my note cards - don't mind the messy handwriting!

Another thing to note is the audience you’ll be presenting to – because just like how it helps for a brand to know their target audience, it would also help for you to tailor your delivery accordingly, whether it’s to your bosses, clients or even to global associates.

I recently hosted at Baybeats, a local alternative music festival at the Esplanade, and we had to keep to a pretty tight schedule. So when I was conducting upclose-and-personal interviews at the start of the festival day, I made sure to watch for the stage manager’s timing cues, in order not to overrun.

Even when I was off stage after introducing a band later that evening, I didn’t tune out completely; instead, I continued to observe what was going on around me. Aside from running through my lines in my head, I also used this time to note what took place in between – what the singer/band said to the audience, how the audience reacted to them, and anything spontaneous/unexpected that took place in between (like when one of the members of post-rock band Amateur Takes Control smashed his guitar on stage at the end of their set!). This helped me to bridge both the performance that had just taken place, and segue that into what I needed to present to the audience.

This may sound like a lot to manage when all you’re trying to do is to recall your points while presenting! But, what you might not realise is that your brain also subtly picks up visual cues as you speak to the audience, much like how we’d also be able to read non-verbal cues during a one-on-one conversation.

Take note of the body language of your audience as you’re presenting, so you can pick up clues as to how people are receiving your presentation. Are they engaged or bored, in agreement or disagreement with your points? These are helpful to know so that you can make any adjustments on the spot, or to bear in mind for the future.

Also, take note if they can't read the font on your slides! (source)

However, don’t let what’s going on distract you; for example, if a phone starts ringing, or if something gets dropped during your talk, don’t let that shake you up – just keep calm and carry on.

Similar to how body language plays a part in observing the crowd, it also plays a big part in engaging the crowd. A good speaker would know that it’s not just about what they’re saying - it’s also about how they’re putting it across.

It’s easy to tell if you’re nervous on stage: an uneasy gaze, a nervous frown, even a hunched posture can give it all away. It may also feel more comforting to fold your arms across your body while talking, but this already puts a visible barrier between you and your audience.

One way to connect with your audience is to sweep your gaze across the room and make eye contact. It may be unnerving to actually look people in the eye, but doing so will make them feel like you’re speaking to them directly, which creates an instant bond. Toastmasters International also has some other useful tips on how to use body language effectively.

Another way to keep your audience engaged is to keep your points succinct. You may have heard of the KISS method – Keep It Simple, Stupid. I would avoid questioning anyone’s intelligence, really, but keeping it simple is quite fundamental in retaining anyone’s attention – even in a regular conversation!

You can also engage your audience by encouraging them to engage with you – have them dialogue with you mid-way during your presentation or allocate time for a Q&A session at the end of your presentation. Or, why not turn the tables on them and ask them questions instead? But, when doing so, you’ll also have to be prepared for this next point:

Try... NOT to say that while on stage. (source)

For all the things you can prepare, predicting the questions you’d be asked is one thing that you can’t; so, how can you best handle such impromptu queries? Some strategies include:

- Taking time to think: Because it’s only understandable if some time is needed to craft a well-thought out reply! However, this should be done in a subtle manner – e.g. by saying “I’ll come back to you in a minute,” as you wrap your head around the question.

- Giving honest/upfront responses: These aren’t exactly for the question at hand, but rather, these could help if you’re not able to answer it on the spot. For example, you could say, “That’s a great question – but I’ll have to look into that more and get back to you!”

- Refocusing or discussing the question: If there’s a part of a question that can’t be answered on the spot, or if there are multiple queries within one question, try refocusing it to an aspect of it that can be answered. Or, you could also encourage the person to give their thoughts on the question they asked, to give you more insight (and to buy you more time in the process!).

After the presentation: Get feedback

Feedback is important for presenters, particularly since we can’t gauge our own performance! It’s helpful to find out what you did well in, and what you’d need to improve on, so ask people you know who were in the audience for constructive feedback on your presentation.

Your feedback is much appreciated! (source)

Here are some specific questions that you could ask:

So – do your prep work, be aware, be engaging, respond to questions to the best of your ability, and get feedback. With these tips on hand (and prior preparation), you should be able to take to the (proverbial) stage and present with confidence and certainty before your audience!

You’re also welcome to let me know if any other tips work for you. Otherwise, as they say in show business – break a leg!